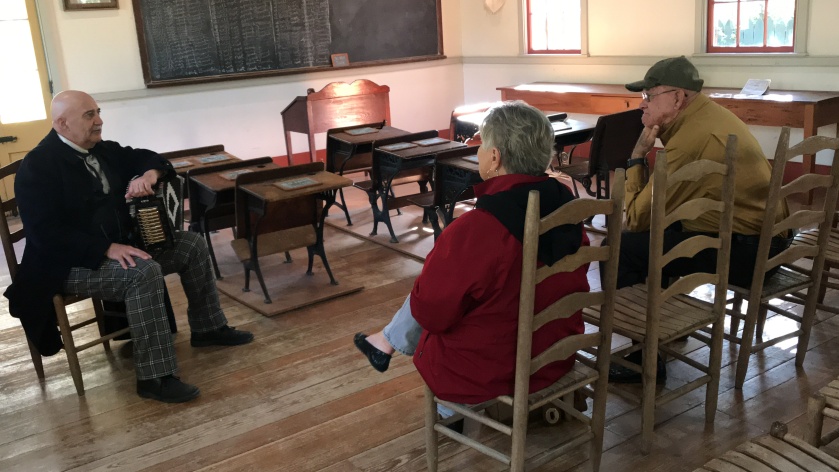 A Vermilionville worker shares a laugh with visitors, as they trade stories of traditions and customs of their Cajun culture.
Photo by Aaron Gonsoulin

For more than 250 years, the history and traditions of Cajun culture has been a vital part of south Louisiana, but according to historians the past has evolved, changing the present.

Bernard said he sees a change where others might see the demise of Cajun culture.

According to 64 Parishes, Cajuns are the descendants of Acadian exiles from the Maritime provinces of Canada—Nova Scotia, New Brunswick and Prince Edward Island—who migrated to southern Louisiana.

Like Bernard, Anne Mahoney Fontenot, curator at the Vermilionville, believes the times and traditions are changing —not the Cajun.

“It’s changing because that’s what traditions do,” Mahoney Fontenot said. “Folklife is how we are using those same traditions now. There might be a different way to do something but it’s been passed down, and that’s folklife.”

Mahoney Fontenot said Vermilionville is a living history, aimed at keeping the traditions of Cajuns and Creoles alive.

“We do hands-on kraft, we interpret folklife as well as their history,” Mahoney Fontenot said. “Our goal is to interpret this history using those avenues of the indigenous, the Creoles and Acadian descents in the early 1800s and up to the end of the 1800s. That’s our timeline.”

Though Vermilionville works to keep the traditions of the Cajun culture alive, Bernard said he believes there is no need to do so.

“I don’t think we Cajuns have to do anything to preserve Cajun culture,” Bernard said.  “I tend to agree with those who frown on the idea of preserving a culture, though, unlike me, they seem to stress that if a culture needs to be preserved.”

A 1990 census says that 27.20% of people in Lafayette claimed to be a Cajun during that time. But according to Mahoney Fontenot, with such a low number, she questions if there is a fear those traditions and culture of Cajuns will die out.

But that’s what museums do, what families do, they keep those traditions alive,” Mahoney Fontenot said.