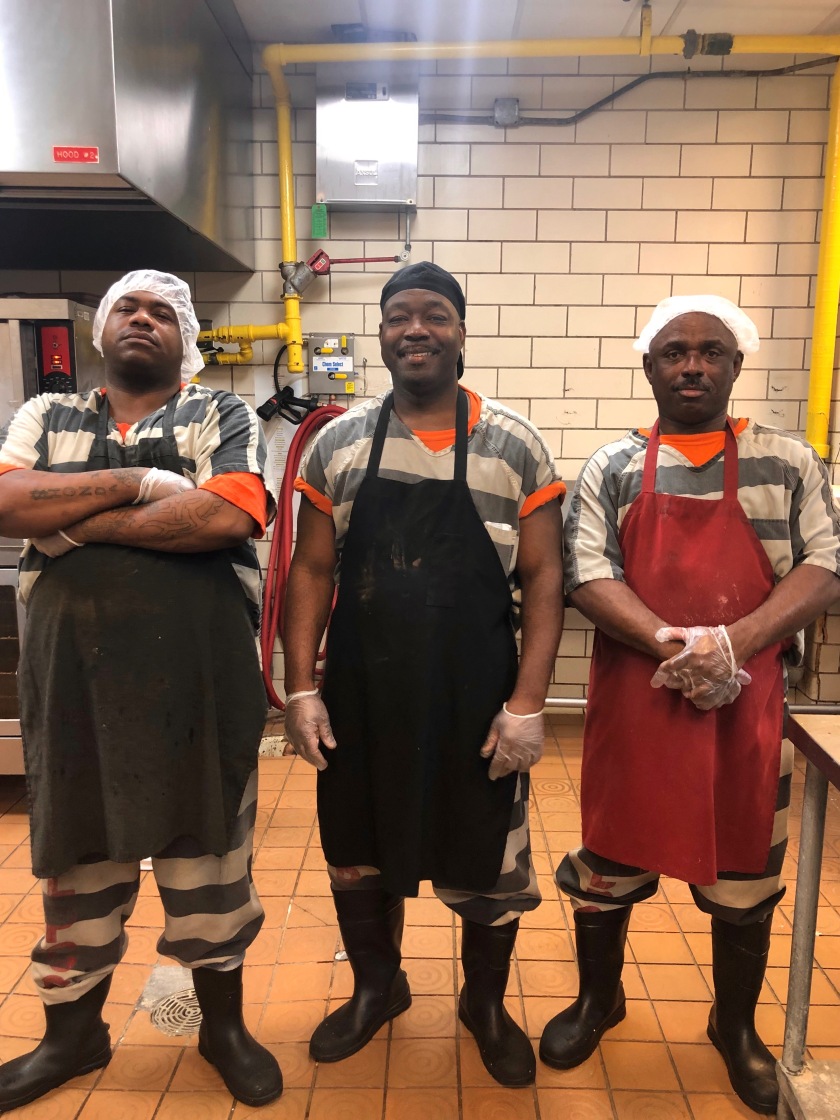 Inmates at the Lafayette Parish Correctional Center instructed four hospitality management seniors at the University of Louisiana at Lafayette on how to prepare food in a kitchen for their course internship.

Members of the course, the Lunch Club, gained experience at the jail under the direction of Dr. Jennifer Jackson. For six years, Jackson worked as a dietitian for the Lafayette Parish Sheriff’s Office and focused on the nutritional needs of the inmates and staff. Being an alumni of UL Lafayette, she wanted to provide an opportunity for students to cook on a large scale with over 800 inmates and staff to feed.

Her inspiration for the program blossomed from previously working ten years in higher education. After having dietitian students tour the jail five years ago, she became motivated to reach out more students. Jackson said she sees the internship program as a stepping stone for inmates and students to grow from one another.

“In society some people don’t look as inmates as the same and for them to have this experience to teach college students at a jail it has and will change them for life,” Jackson said.

Jackson in her office at the Lafayette Parish Correctional Center

Becky Dubois, a senior instructor in the department of marketing and hospitality at UL Lafayette, agreed to have her class “The Lunch Club” partner with the jail in the program.

“It’s an experience they would not normally have,” Dubois said.

As the instructor, Dubois visited the jail beforehand to see how the operation would work. She felt the internship would fit into the curriculum of the course and would be beneficial. Dubois plans to continue the partnership with the jail in the fall semester with approximately 18 students compared to the four this semester she said.

Kelu Archbold, one of the students completing her internship, aspires to work in the sales department for the hotel industry. When she heard about the internship, she was worried because she didn’t know how the environment would be. Once working with the inmates, Archbold found the process eye-opening.

“Everyone was helpful and made us feel comfortable,” Archbold said.

“They are very strong and committed, we went through the ups and downs together,” said Chad Williams, inmate and main cook.

Williams is passionate about the food the kitchen prepares. He wakes up with the same mindset every morning, seven times a week, wanting to improve every moment in the kitchen.

Williams recalls the many eggs he burned and how much he grew as a person and cook. He gained a drive for excellence and was eager to collaborate with the Lunch Club. Because of their determination, he believes they pushed him to be a better chef.

Once a person accepts not everyone will be satisfied with what is made, it is a good thing, Williams said. The hours in the kitchen take patience, dedication and are considered a blessing from God, according to Williams.

Because of the amount of inmates, Williams spoke of the gallons of food to prepare. A memorable day for him meant an unforgettable challenge: perfecting the lumpy mashed potatoes next to the students. He said they were sweating with the potatoes, but they never gave up. They wanted to do it right.

Robertson, known as “Cinnamon Roll Willie,” was thankful to the students for pushing him to improve in the kitchen. He used to only wash and clean trays, but now makes cornbread, cheesecake and, of course, cinnamon rolls. Archbold called him an expert cinnamon roll maker.

Jackson said there is an incentive for the inmates who work at the jail. The center pays inmates which allows for them to get benefits other inmates would not have. Snacks, headphones and shampoo are on the list of purchasable items for them to choose from.

One of the shelves of food in the jail

In the future, Jackson hopes to expand the program and reach out to more universities. She saw the difference the program made and how it positively impacted the students and inmates.

Perkins believes this experience impacted everyone equally and looks forward to working with another class. Perkins said he wants the previous students to succeed in life and felt inspired to one day go to UL Lafayette for culinary school.