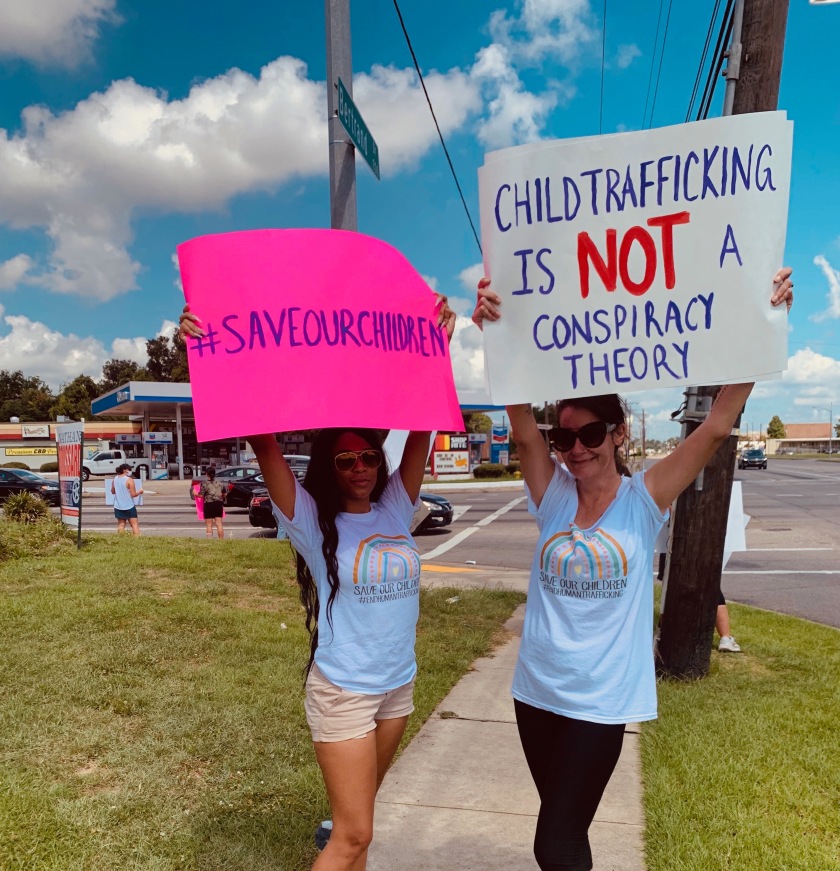 Feature Photo: April (right) and Imani Guillory (left) at the “Save Our Children Acadiana” march on August 15th. Provided by April.

Cajun Medium April and Cajun Mama Imani Guillory called Acadiana citizens of all ages to action, as a line of defense against child human trafficking.

“Human trafficking is the process of trapping people through the use of violence, deception or coercion and exploiting them for financial or personal gain,” according to Anti-Slavery International.

April, 43, and Guillory, 30, started the human trafficking awareness group “Save Our Children Acadiana” in August to raise awareness and teach the community how to protect the children of Acadiana.

Save Our Children Acadiana held their first march in mid-August and had a gathering of 112 people. While April and Guillory said they felt proud of their march and thanked the community for their support, April said she wants more.

“The hashtags are great. The marches are great, but the real change happens in our daily lives,” said April.

According to Guillory, more people in Acadiana are sharing their human trafficking stories online, especially in their Save Our Children Acadiana Facebook group.

As of September 2020, there are 54 missing persons reports in Lafayette, 30 of which are minors. According to the Department of Children & Family Services, there were over 900 reported cases of human trafficking in Louisiana in 2019.

Of all reported victims, 59% were identified as juveniles. Victims ranged from two months old to 63 years old. There were 106 sexual and/or labor trafficking victims ages 12 and under.

April said she is hesitant to quote statistics because she believes more children are being trafficked than what is formally reported.

“I promise you this happens every day in Acadiana,” said April, “If you see something, say something. We are the last line of defense… Once a child is trafficked and moved from here, the harder it is to find them.”

Guillory and April said they hold themselves and the community responsible for keeping the children of Acadiana safe.

“As a culture, as Cajuns, all our maw maws taught us to mind our business, but the children of Acadiana are our business.” said April.

“One person can turn a situation around. One person to help, have their eyes looking, and know a situation doesn’t look right,” said Guillory.

The call to action does not stop with adults. Both Guillory and April agree it is important to teach children about the potential dangers of human trafficking in a simple and non-traumatic way.

Guillory suggested parents continue to teach their children the simple phrase, “stranger danger.” She said any adult who hears a child yell the phrase will come to their rescue. April encouraged parents to teach children to share anything they might feel is concerning about a friend’s behavior.

“Kids are more likely to talk to other kids,” said April.

Guillory said children need to be educated on human trafficking rather than “keeping them in a bubble.”

“It is up to us to develop grassroots efforts to save our children. The mothers, fathers, brothers, sisters, and the neighbors next door… we are the ones who must speak out for the innocent… It is our job now and we will succeed,” said Guillory.

“If we can save even one Acadiana child then it’s all been worth it for me,” said April.If you or someone you know may be a victim of human trafficking, call the National Human Trafficking Hotline at 1-888-373-7888, or send a text message to 233733.